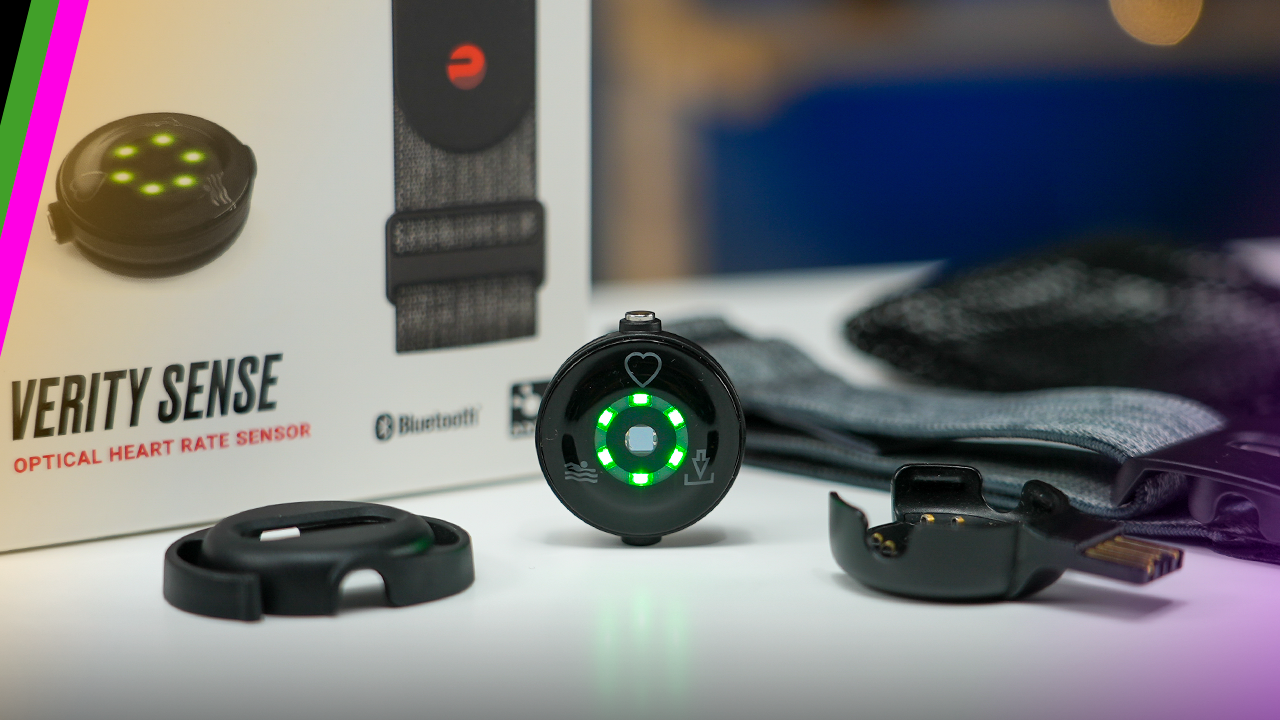 The Verity Sense is the next iteration of the Polar OH1 optical heart rate sensor which has been one of my go-to heart rate sensors worn on the arm. The OH1 provided a solid reference for heart rate accuracy when performing all the tests I like to do and the Verity Sense updates the OH1 with improved battery life, better usability with new icons and lights,, more internal storage, as well as an improved strap. 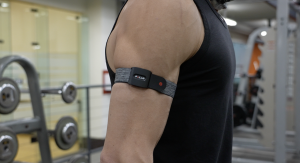 Optical heart rate sensors worn on the arm collect more accurate heart rate than a wrist based optical heart rate sensor due to its location – there’s more muscle and flesh on your arm which just works better for these types of sensors. You can use the Verity Sense to collect heart rate data for all sorts of activities like running, cycling, and weight training, but you can also use it for swimming where it can track your heart rate as well as distance in the pool, and you can also store your heart rate data on the unit itself which makes it ideal for activities where you don’t want to wear a watch but still want to record your heart rate.
Inside the box, you’ll get the heart rate sensor itself, the new and improved strap, a clip so you can attach it to your goggles for swimming, a charging cradle, a fishnet carrying pouch, and some manuals. 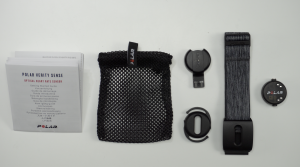 New Strap Design
I only had one complaint with the OH1 – the clip on the strap made the sensor easy to accidentally flip around especially when I was putting on a long sleeve shirt – but they addressed that with the Verity Sense with a new clip that makes it much more secure and prevents the strap from flipping. But not only that, on the inside of the clip you’ll notice this metal ring – this little ring is a signal booster that increases the bluetooth range to up to 150 meters. The strap itself is the same width as the original and it’s also made out of the same, very comfortable material and there’s also now a velcro closure so it’s easier to take on and off. The strap on the OH1 didn’t have this velcro closure so you had to slip it over your wrist and move it up your arm.

There’s three ways you can use the Verity Sense – you can use it just like any other heart rate monitor pairing it to a compatible device, you can use it to store heart rate data if you won’t have a compatible device nearby, and you can also use it for swimming and these three modes are indicated on the sensor itself with a little heart icon, a download icon, and a swim icon and there’s also an additional multi color LED at the bottom of the unit indicating which mode it’s in: Blue for Heart Rate with a compatible device, Green for offline Recording, and White for Swimming.
How to use it
To pair it with a compatible device, you just turn it on and it pairs just like any other external heart rate sensor and you can do this using Bluetooth as well as ANT+. This is the default mode where it has 2 bluetooth connections along with unlimited ANT+ connections which provides a lot of flexibility if you want to pair it with more than one device. An example of this would be if you want to pair it to an online cycling training platform like Trainer Road or Zwift, along with your Polar watch, and then you can pair it with an unlimited amount of devices that use ANT+.
To store heart rate data, you’ll turn it on, then press the button again once to toggle it into recording mode. The LED will flash, the bottom LED lights up green, and then it goes into disco fever mode indicating you can start your training. 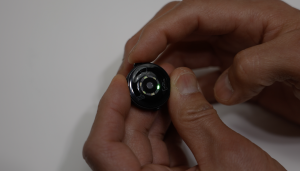 From this point you just go about doing your activity as you normally would and you don’t have to have a watch or your phone close by at all.
When you’re done with your activity, simply long press the button to turn it off. After about 5-10 seconds a light on the bottom starts flashing blue which indicates that it’s now syncing your heart rate data with the Polar Flow app. After it’s done syncing your activity is listed in the app as an other indoor activity and then you can change this to whatever activity type that you wish, like this activity I used it for an indoor cycling session.
For the swimming mode, you’ll turn it on, press the button twice and this toggles it into swimming mode indicated with a white LED. You can then attach it to your goggles where it collects heart rate from your temple. The goggle clip is also redesigned to be more secure just like the arm clip. And then similar to the previous recording mode, you just do your swim as you normally would and when you’re done, you just turn it off and it does the same syncing procedure as before and then your swim data is collected in the Polar Flow app.
And speaking of the Polar Flow app, this is where you can change the pool length, toggle on and off visibility, ANT+, and Bluetooth, and this is also where you’ll perform firmware updates.

As of launch, the storage and swimming modes only work with the Polar Flow app but Polar is offering an SDK to developers which would allow other apps to access this data, but it won’t work for downloading heart rate over ANT+.
Internal Storage and Battery Life
You can store up to a whopping 600 hours of training data with the Verity Sense up from the 200 hours on the OH1 and it has a battery life of up to 20 hours which is up from the 12 hours from the OH1.
Heart Rate Accuracy
For heart rate accuracy, let’s start out with a little 5K run. At the beginning, it was slightly slower to ramp up than the two chest heart rate straps I was using but after about 20 seconds it was right on track with the other sensors. About 22 minutes in it started to wander just slightly and then it tracked the cooldown well but it was maybe about 3-4 seconds behind the other sensors.

For cycling, here’s that indoor cycling training session that we saw earlier. I used the recording mode to track this session which is why at the beginning and the end of the workout there’s a little gap because that’s when the sensor wasn’t against my skin when I was turning it on and off. But for the rest of the workout you can see that’s basically right in line with another arm optical heart rate sensor as well as 2 different chest heart rate sensors. The only portion where it wandered was a section at the end where it was just a little late with the drop in heart rate but other than that this is exactly what I want to see.

Indoor cycling is probably one of the easiest activities for any type of heart rate sensor to get right but let’s go to the complete opposite end of the scale with weight training which is one of the toughest activities to track accurately if you’re measuring from the wrist or the arm because of all the arm movement.For most of the session the Verity did a pretty decent job. At the beginning where I was doing bench press it was pretty close to two chest heart rate straps except for the last set. On the lat pulldowns in the middle it was pretty much spot on. It was a little slow to react with these tricep extensions after that and it had a few issues with the box jumps at the end.

And then for swimming, the Verity Sense tracked high the entire time which I found to be strange because I generally get pretty good results from the temple for swimming heart rate. I was only able to get in this one pool session though so I’ll revisit this when I can get back in the pool.