Today, Apple announced the new Apple Watch Series 5 which brought something that has been highly requested for quite some time – an always-on display. As expected, the Series 5 will retain the same external dimensions as the previous generation Series 4. The previous generation Series 4 brought the first “major” design change with a more refined design than the Series 3 so this year was expected to be an “S” year with more of an incremental update rather than a complete design change. But the news of the day, in my opinion, isn’t the Series 5, but still, let’s go over some of the details. Note that images are from Apple.com. 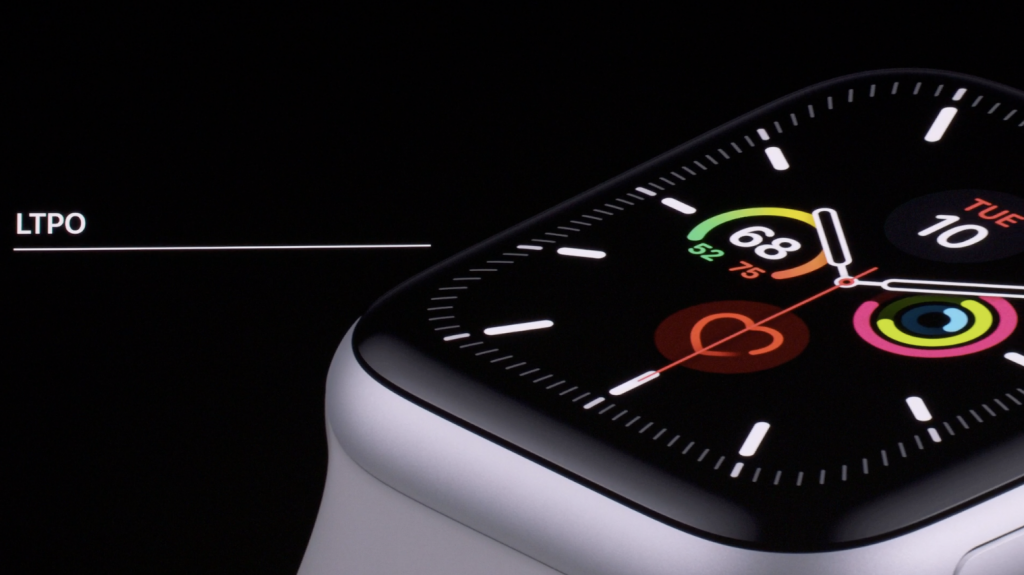 The new always-on feature is achieved using a new low-temperature polysilicone and oxide display (LTPO) along with an ultra-low power display driver coupled with an efficient power management circuit and a new ambient light sensor. All those fancy words results in an always-on display that is supposed to get you “all-day” 18 -hour battery life.

On one hand, it’s disappointing to hear that we’re not seeing more than the same “all-day” battery life as the previous generation Series 4, however on the other hand, I almost always got more than just one day. In fact, I often times got 2 days using it for receiving notifications as well as replying to text messages, especially using voice dictation, and on some occasions I would take a call on it. I’m not the kind of person who tries to use my watch for as much as it can possibly do – I’d rather use it for everything that it can do best and leave the rest to my iPhone.

But still, we’ll have to see if Apple is being conservative with it’s battery life estimate.

But notably missing was the ability to not have an always-on display and have the previous generation’s behavior of gesture to wake, touching the face of the watch, or pressing one of the buttons to wake up the screen. The gesture to wake was one of the best implementations that I’ve tested and it’s very predictable so I hope to see an option to not have an always-on display which could in turn extend that battery life even further. 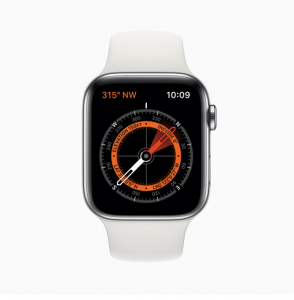 Also added was a new magnetic compass – the biggest benefit of this addition is that the Apple Watch Series 5 will now be able to have the correct orientation when you’re using the Maps app, but will also provide more navigational capabilities as well as third parties being able to tap into this technology.

Another thing new Apple announced is the ability to send out an SOS internationally from over 150 different countries regardless of where you purchased your Apple Watch, but this functionality is only going to be available on the cellular versions.

They have also integrated this emergency SOS feature to work in conjunction with fall detection, so the Apple Watch will place an emergency call if you were to take a hard fall and remain motionless for over a minute.

Watch OS6 will bring a few new health and fitness features including a Cycle Tracking app for women, a Noise app for monitoring ambient sound to help avoid hearing damage in loud environments, as well as Activity Trends that can provide a long-term breakdown of your activity patterns to see your progress over time. 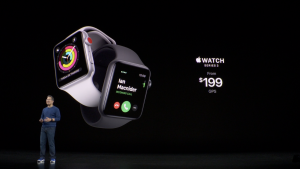 We saw some good, budget friendly options come out this year for fitness-focused wearables: the Polar Ignite (currently reviewing), the Versa 2 from Fitbit, the Samsung Galaxy Watch Active, as well as the Forerunner 45, all coming in around that $200 price point, more or less. Three of those wearables have solid fitness chops behind them, and then other than the Galaxy Watch Active, none of them can compete with the Apple Watch Series 3 as a smartwatch. There’s a distinct advantage when you make the watch as well as the smartphone, which Apple does in this case. It’s going to give those watches a run for their money.

However, then we have some higher priced smartwatches with the likes of the recently announced vivoactive 4 and Venu from Garmin, as well as the not-yet-released Samsung Galaxy Watch Active 2. All of those start at $279 going all the way up to the Venu at $399. Again, Apple is taking shots.

But where it gets interesting is in the realm of smartwatches below that $200 price point from companies like Amazfit. Amazfit offers some pretty good options for the budget conscious that may not be as robust in how well they are built out, especially from the standpoint of the accompanying smartphone app, but they are an easy point of entry for people who want their first, or maybe even second smartwatch. Here’s where someone that is comfortable with $150 may be able to justify shelling out just $50 more for an Apple Watch Series 3.

The price of the Apple Watch Series 3 is low. Very low, especially for how much this watch can do. Tight integration with an iPhone. iMessage. A robust app selection. Taking calls on the watch with a built-in speaker. Solid construction. Swimming, both in the pool as well as open water. Oh, and let’s not forget that it has a pretty darn good heart rate sensor. Not to the amazeballs level of the Series 4, but it’s darn good none the less.

With the price this low, it makes me wonder if Apple is selling the Series 3 as a loss-leader, a device that is priced in a manner that they make little to no profit on it just to be able to draw people in to the Apple ecosystem, which once you’re in, it’s hard to leave. iMessage being available across your iPhone, iPad, and Mac is one thing. Then you have iCloud sharing which can sync stuff like your photos, contacts, calendars and more across all your Apple devices. And from a content-creator standpoint, I use AirDrop frequently throughout the day.

But that Apple ecosystem does not come without a price. When you start to get more than one Apple device, at some point you’ll most likely have to purchase a storage plan that goes beyond the 5GB that comes free.

People have their smartphone OS preference, or in some cases, they may be passionate about it. But a comment that inevitably appears while discussing an Apple Watch is, “if it were only available on Android.”

So that makes me wonder – will the price of the Apple Watch Series 3 be able to attract people away from their Android phones? Only time will tell.

If you’re curious about the how the Apple Watch Series 3 stacks up as a fitness device, check out the review below: