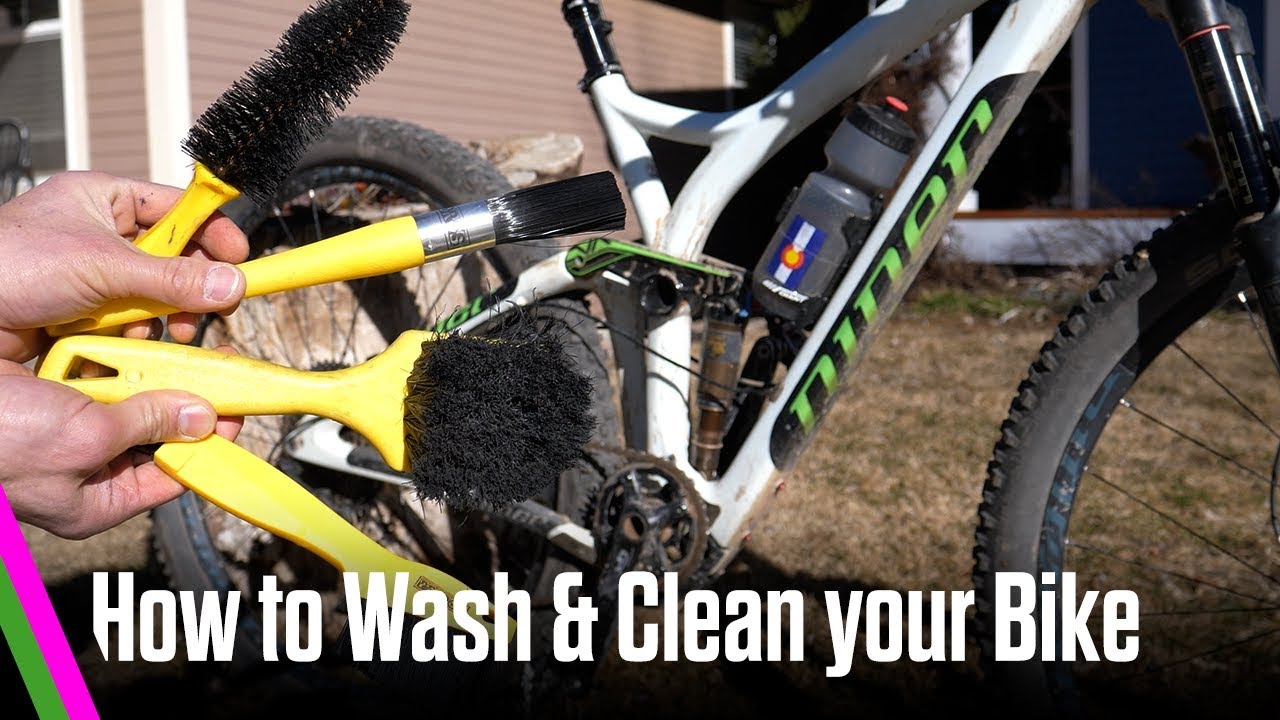 I’ll be the first to admit that I don’t clean my bike as often as I should.
After working in bike shops for over 15 years, I’ve had my fill and pretty much only clean my bike if I have to…such as coming back from a ride like this:

The 2017 FoCo Fondo brought some inclement weather and those awesome dirt roads around Northern Colorado turned my bike into a sloppy mess and it was time for a deep cleaning, although I just cleaned it the day before.

Today I’m going to show you how to thoroughly clean your bike, from the frame to the wheels, as well as the drivetrain using the Pedros Brush Set.

Now, this isn’t simply a consumer grade brush set. This is the same exact set of brushes I’ve used, as well as many shops use every single day. There are some other options out there, but this is THE set to get. We went through a set or two every season at the shops and with hundreds if not thousands of bikes being washed, so this set should definitely last you a long, long time.

The first thing you want to do is get a plastic bucket of some kind with about 2-4 gallon capacity. This 40 lb kitty litter bucket was perfect with a lid and a handle so I can store everything inside and grab it when the time comes.

I store everything inside the bucket that I need…
First thing to have is Dawn dish soap, but the Professional grade variety. You’ve all seen the commercials of them washing those poor ducks off that got caught in oil spills. Trust me, it works and they don’t lie.
Next up is Citrol – an industrial-strength degreaser. I’ve used a LOT of degreasers over the years from Finish Line to Simple Green and even harsh solvents and this is THE one to use, even though it’s a little harder to find. It’s completely non-corrosive, it’s biodegradable and it basically melts grease off of your drivetrain.

Next up are the Pedros brushes starting with the frame and wheel brush. Then you have a cone brush for hard to reach places, a “parts cleaning brush” which they say is for applying degreaser, but since our degreaser is in an aerosol can, we can repurpose this for another use which I’ll show later, and finally a toothbrush for the drivetrain.

You’re going to want to have an area closer to your source of water. I have mine on the side of my house and I simply attached a wood, L-shaped bike hanger to hang my bike. You could also use your repair stand, but just keep in mind that it will get dirty. I picked up this crappy repair stand on Craig’s List for $10 just for cleaning.

If you’ve got more than one bike that needs to be cleaned, just grab them all since you’ve got everything out already.

Then, BEFORE soaking down your bike, spray your drivetrain with a generous amount of Citrol to let it soak in and do it’s magic. We’re going to work on the drivetrain first since it’s usually the dirtiest part of the bike and you’ll definitely get some of that dirt on your frame.

While the Citrol does its dirty work, put a fairly generous amount of Dawn in your bucket and fill it up about half way or so with water.

After about 3-5 minutes, you can start scrubbing away at your drivetrain using the toothbrush. I start with the cogs, then move to the derailleur and then for the pulleys, use the other end of the toothbrush with the hard, pointy bristles to get that hard-to-get crap off. Alternatively, you could do this with a small flathead screwdriver beforehand but I’ve found that to be unnecessary.

Then, start scrubbing your chain making sure to back pedal to get the entire chain. Do this on the top of the chainstay as well as below it to get both sides.

Then, shift into a completely different gear to clean the cogs that the chain was covering. Just like the chain, make sure to back pedal to hit the entire cassette.

From here you can move on to the chainrings where you’ll want to hit both the outside as well as the inside, were most of the grime actually builds up. If you’re running more than one chainring, make sure to get in between the rings.

After the first pass, spray it off and then repeat if you missed any spots. The Citrol won’t be as effective with a layer of water but at this point you should have gotten the majority of the grime.

Now is the time to tackle the rest of the bike. Start by spraying your entire bike down trying to knock off as many large chunks of dirt or mud as you can. DO NOT, I repeat, DO NOT spray directly into your bottom bracket, headset, hubs, fork seals or where your seatpost enters your frame. You don’t want to get water into your frame, especially if you have a steel one, and spraying water directly into a bearing surface could compromise the bearings and possibly lead to rust.

Use the frame and wheel brush to scrub your frame first, before your wheels, making sure to rinse it off between scrubbings if your bike is really grimy. You don’t want any dirt particles to be stuck in the brush since they can scratch your frame. After scrubbing your frame you can move on to the wheels where you’ll scrub both the tires as well as the rims.

After all the large areas are scrubbed using the frame brush you can use the cone brush to get into those tighter areas like behind the seat tube, the inside of the chain stays, behind the fork race as well as inside the fork, in between cantilever brakes or in between the rotors on your hubs as well as the hub shells.

Lastly, use the parts cleaning brush for those really hard to reach areas such as under your bottle cages and at the fork seals, which always seem to collect a good amount of grime.

We’re now done with the dirty work so it’s time to spray it all off.
Once again, be careful to not spray directly into all the aforementioned areas like your fork seals and bearing surfaces when you’re rinsing.

It’s not necessary to dry your bike by hand and you could just simply let it sit, but chances are you’ll probably have a small area or two that may need some touch up which you can do with a rag so you can knock out two birds with one stone. Actually 3 birds cus if you don’t wipe it off, you can get those annoying drying spots.

The one thing I do do is dry my chain just to reduce the risk of rust developing. You can do this with a rag but if you have a compressor, you can spray the chain off as well as the rest of the bike.

Make sure to reapply lube to your chain since it’s essentially devoid of any good lubricant at this point.

Now, the only thing to do is go get your bike dirty again!