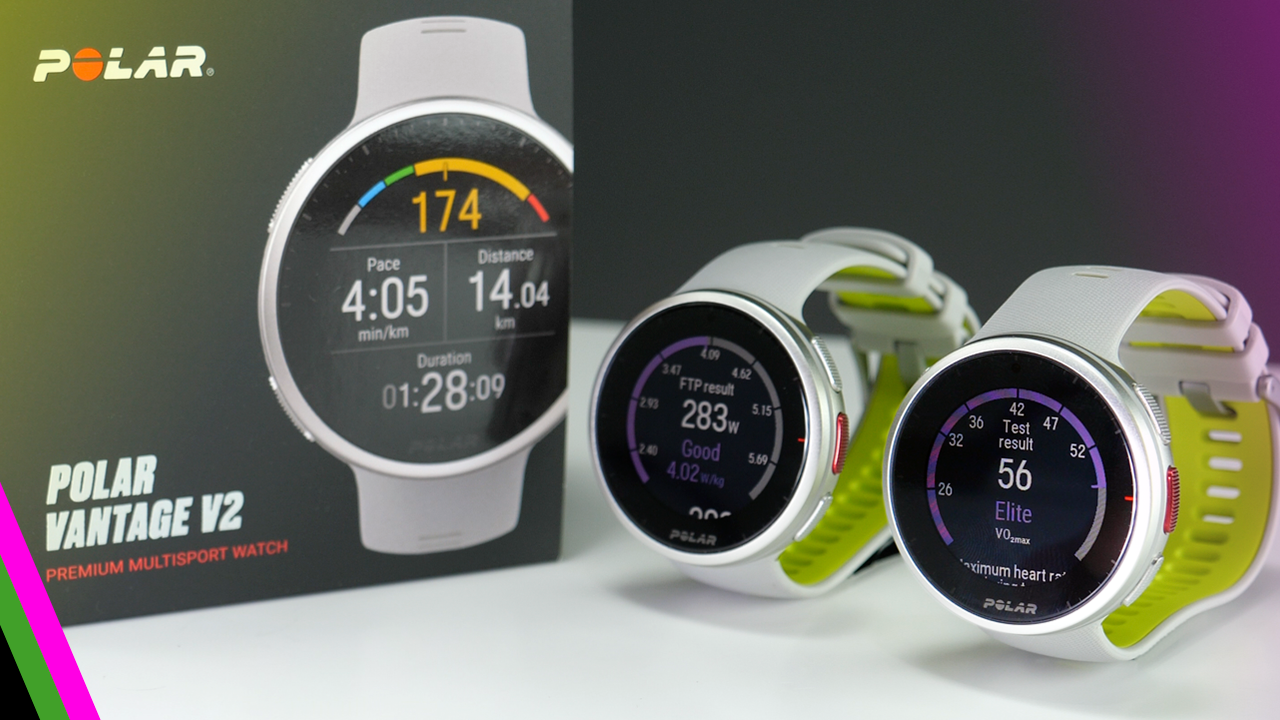 Today, Polar launched the Vantage V2, the successor to the original Vantage V that came out almost exactly 2 years ago. The Vantage V2 sports a brand new aluminum construction which reduces the weight down to just 52 grams, adds in features that were first introduced with the Grit X, and has brand new features including performance tests surrounding running and cycling.

The Vantage V2 is Polar’s top-of-the-line GPS multisport watch aimed at athletes wanting a capable sportswatch that can track all their training, delivering plenty of feedback in terms of your performance and recovery, with features like Cardio Load Status which gives you an indication of your workout volume as well as excellent sleep tracking to gauge your recovery.

If you prefer to watch a video of this in-depth review, you can check that out here, otherwise, read on! 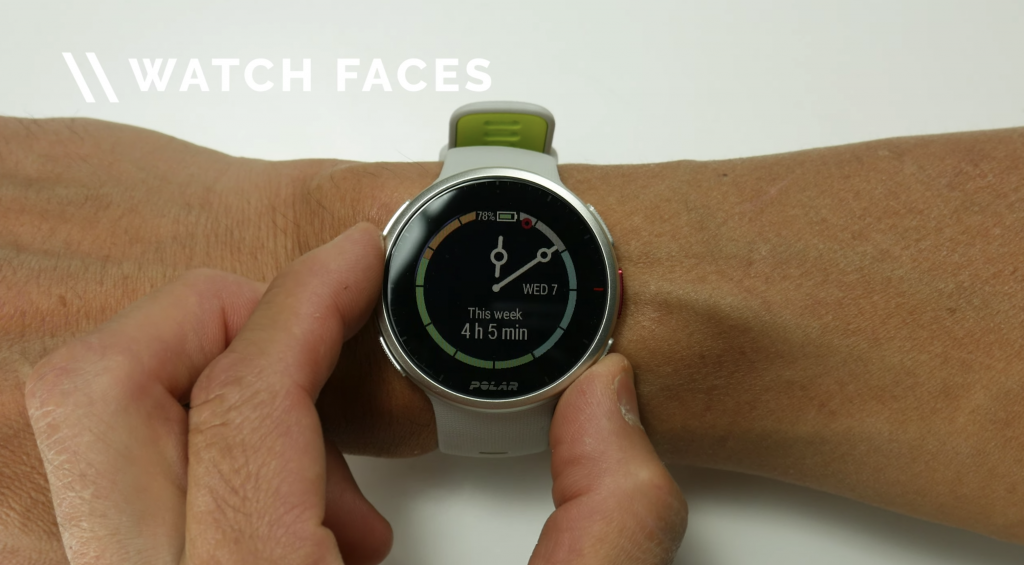 The Vantage V2 also adds a new Weekly Summary Watch Face View which shows, well, your weekly training summary – but it’s a nice looking view having a color-coded ring around the watch that represents time in different training zones. You can then dive in to see more stats for the week including your total distance, number of activities, calories burned, as well as your activity history for that particular week. 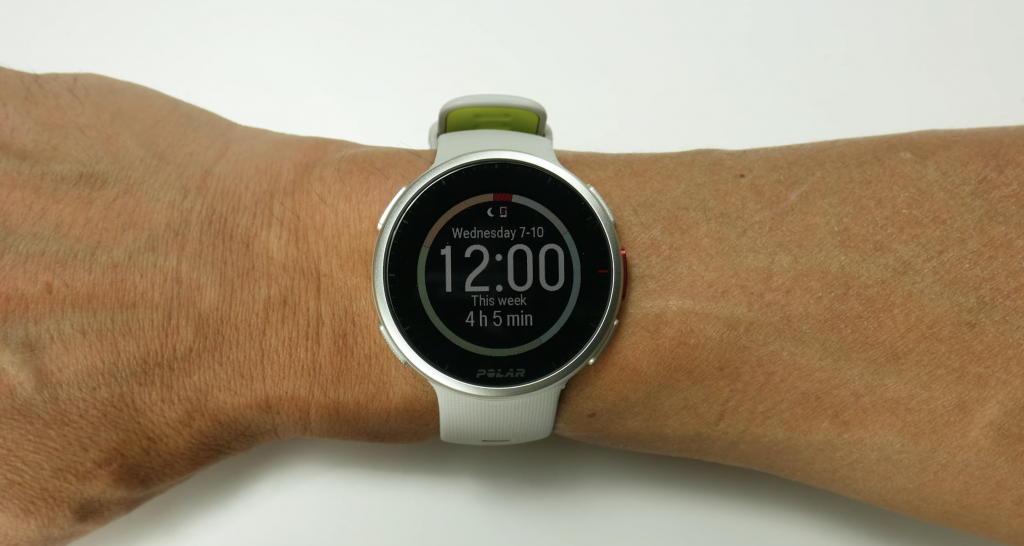 Polar also added the Weather Watch Face View that was introduced with the Grit X which shows quite a bit of information on upcoming weather.

With the music controls, these will allow you to control the music that’s playing on your phone while paired. You have the option of having them always on, on for training, or off for training, and this is available for both iOS as well as Android phones. 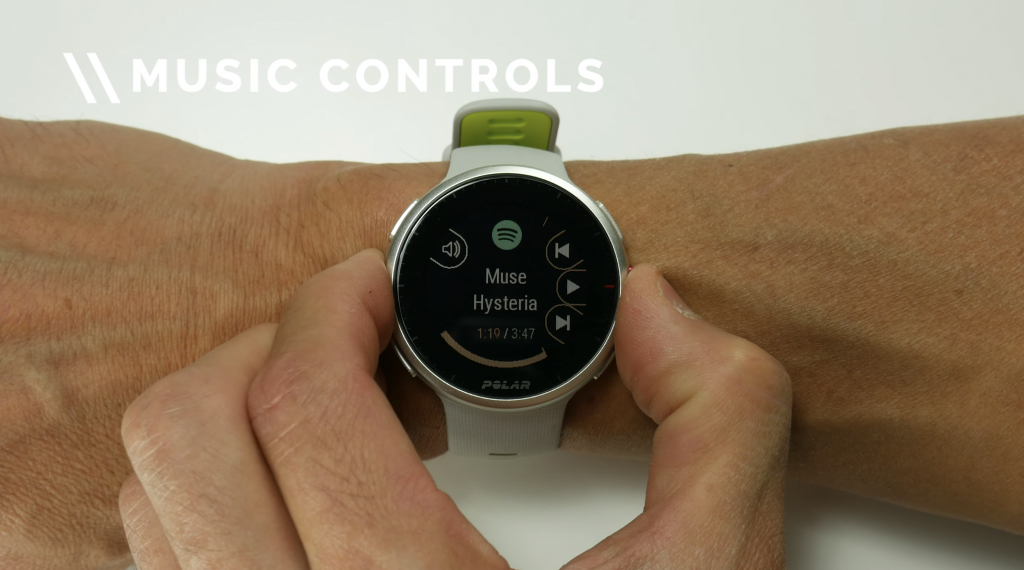 The Vantage V2 is advertised to get up to 40 hours of GPS battery life and that’s with everything on the highest accuracy settings which takes samples every second and you can get up to 100 hours by tweaking the power save settings which reduces accuracy but increases the GPS runtime.

Also included are the power management features that were introduced on the Grit X which allows you to fine tune the GPS recording rate, heart rate sensor, as well as screen saver settings to get just the right balance of battery life for your particular activity. 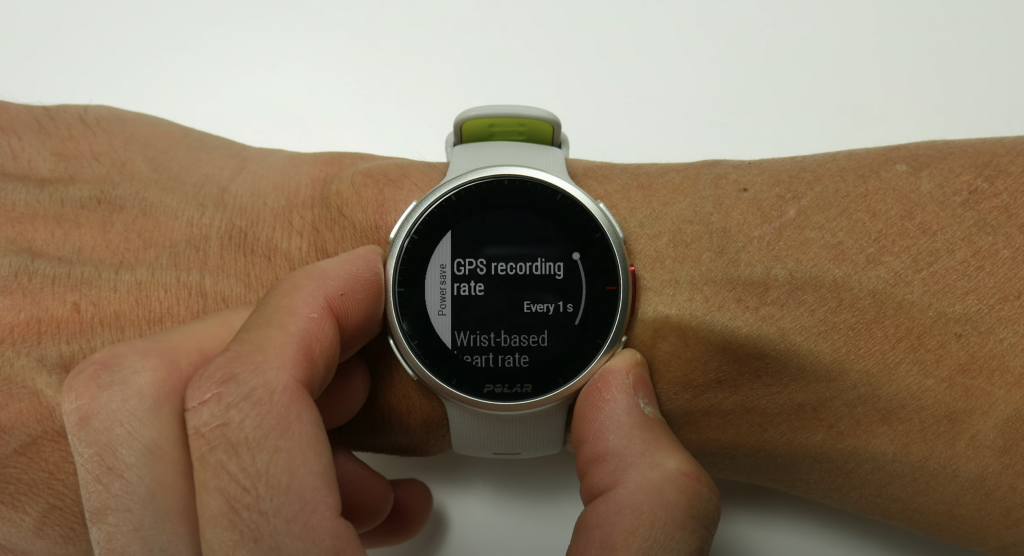 The Vantage V2 uses an aluminum housing rather than the stainless steel that was found on the original Vantage which drops the weight down to 52 grams which is darn light for a watch with these capabilities. But there’s supposedly another advantage to using aluminum – Polar used a manufacturing method where they sandwich a thin layer of plastic in between two layers of aluminum. 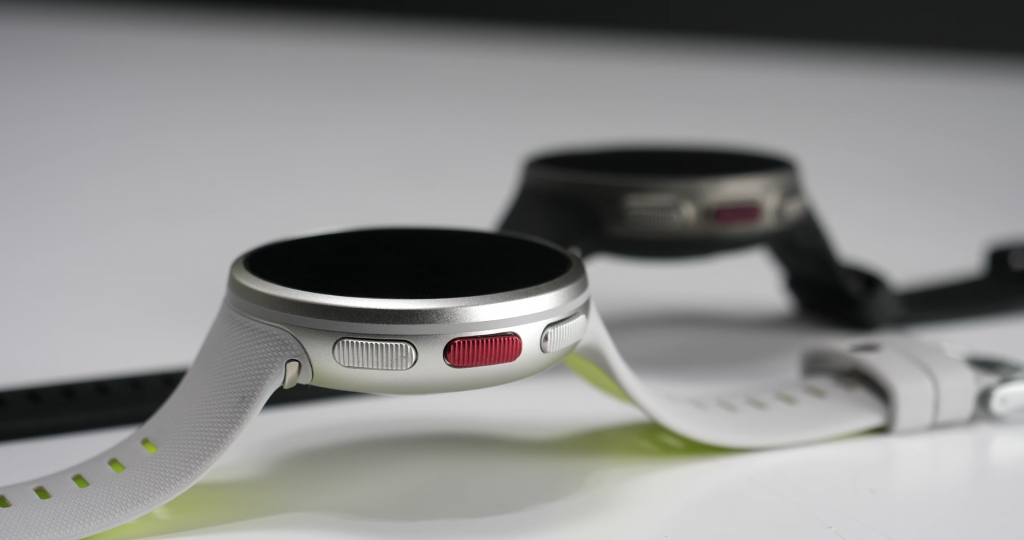 Another new update to the V2 is the heart rate sensor which has been updated to be the same one that’s found on the Grit X which is Polar’s latest and greatest Precision Prime heart rate sensor. The sensor may appear to be the same as the original Vantage, but they changed the algorithm in regards to the firing patterns and colors which is supposed to be more accurate than the original by removing more ambient light and artifacts that can result from movement. 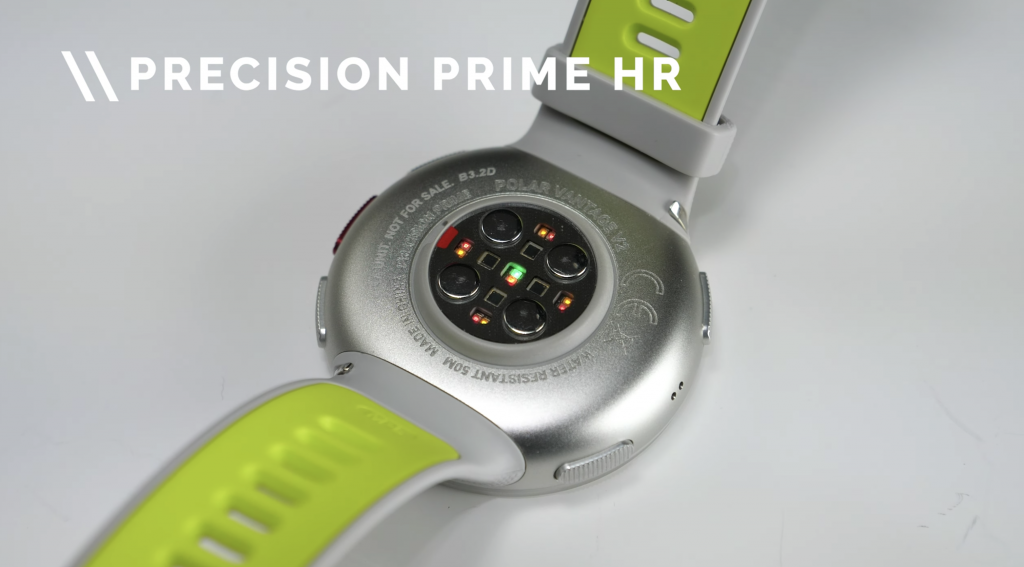 The new aluminum construction pays off in the GPS accuracy department. I had zero issues with the Vantage V2 and it did very well for both cycling and running. 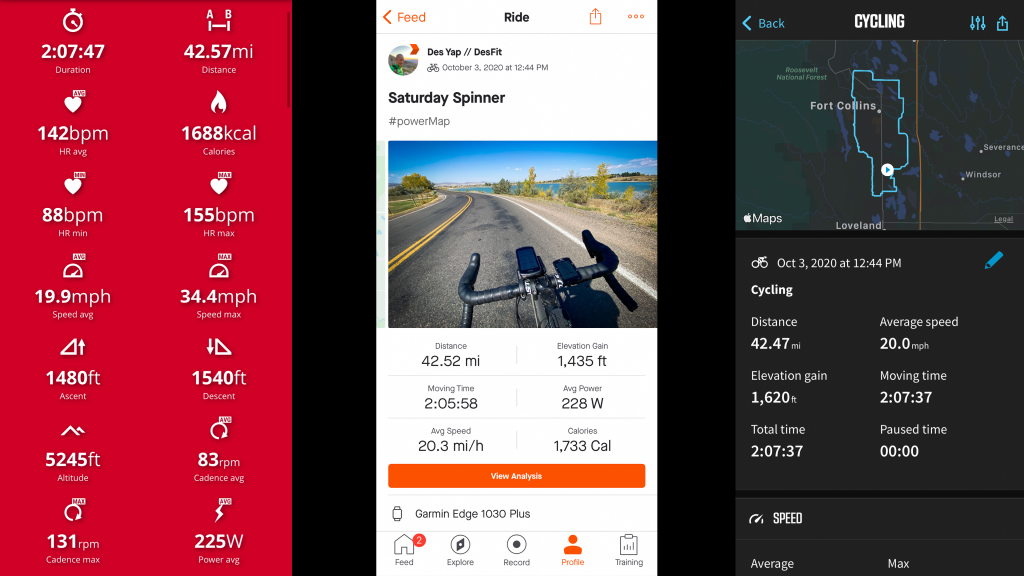 Although the Vantage V2 performed well with GPS accuracy, the heart rate performance left me wanting a bit more.

The heart rate for indoor cycling was pretty good, but that’s an activity that pretty much all wrist-based heart rate sensors get right since there aren’t many variables involved like arm movement, however there were a few bobbles on this session. 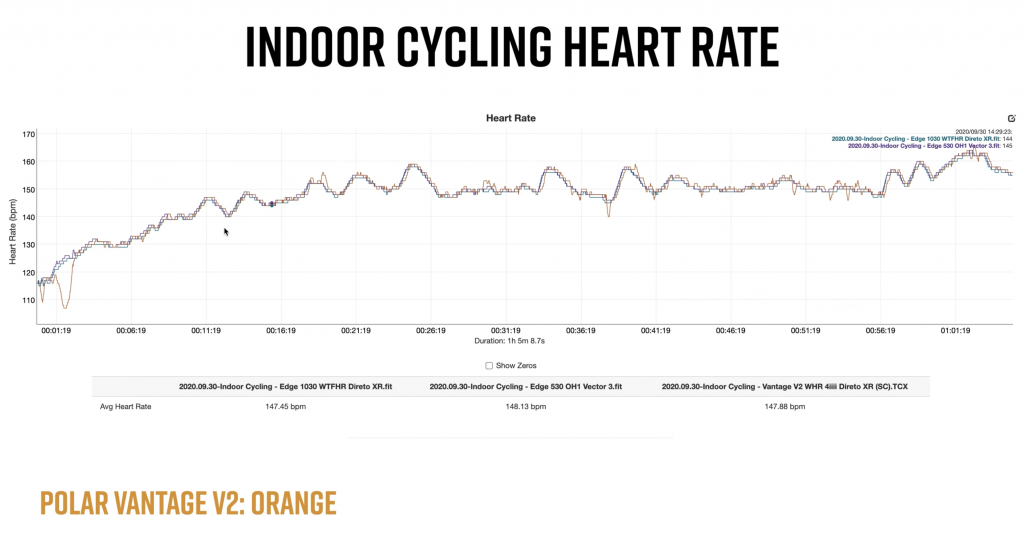 Taking the Vantage V2 outside, things were a bit less pretty especially on the last 1/3 of the ride. 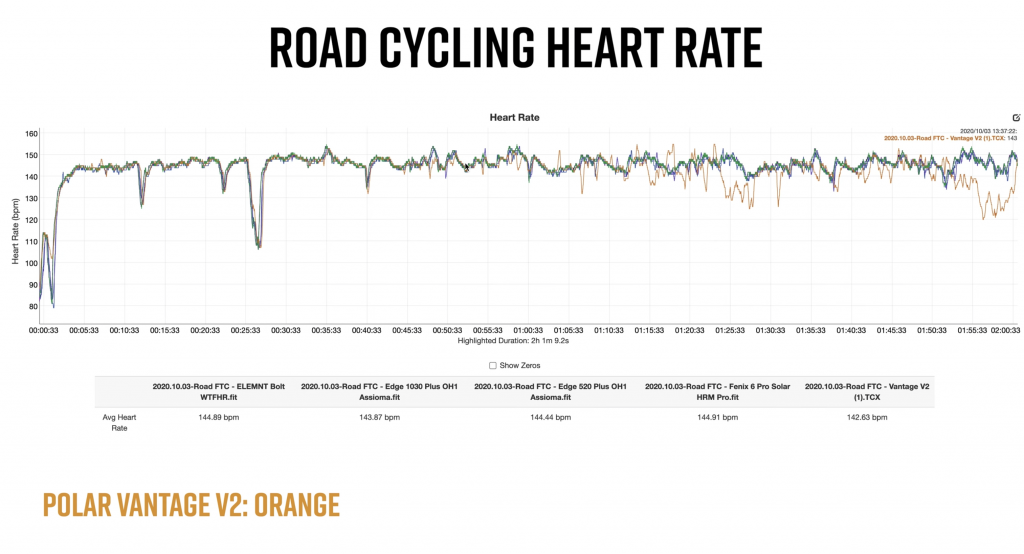 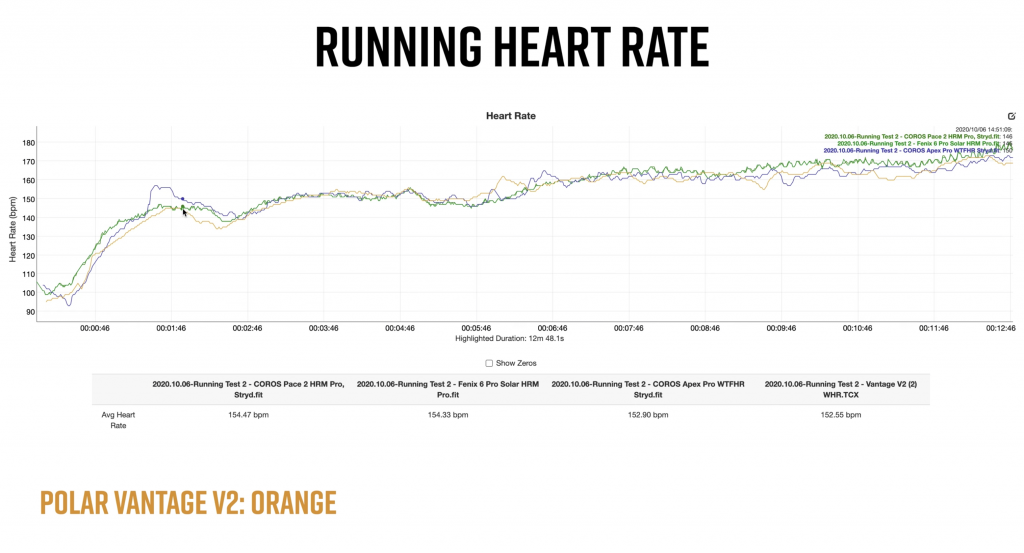 The running test is comprised of a warm-up period and then you have to run for at least 6 minutes and reach 85% of your maximum heart rate for it to provide you with a VO2 Max after completing the test. 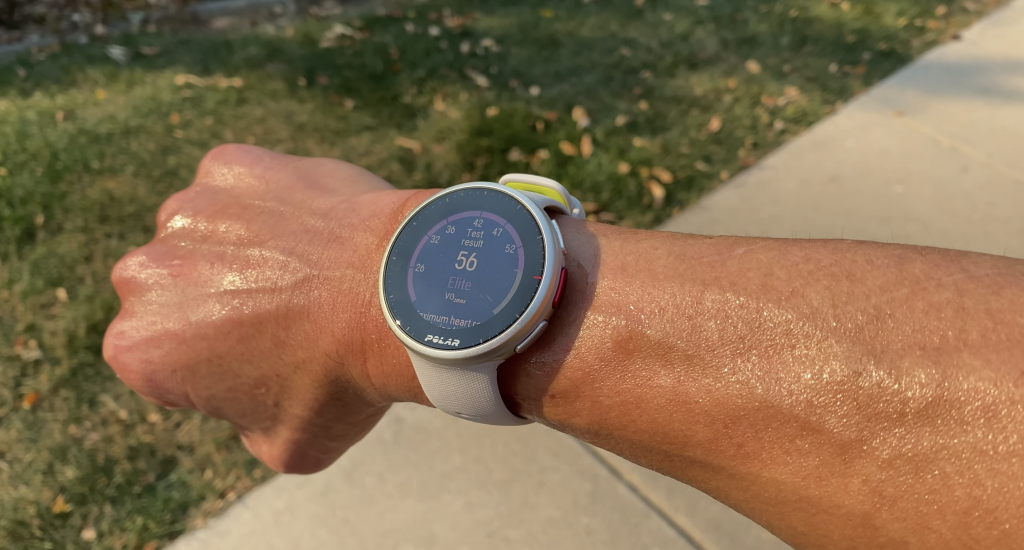 The cycling test is an FTP test (Functional Threshold Power) that consists of a warm-up period followed by a test period of 20, 40, or 60 minutes where you have to maintain an average power output. Unlike what a lot of companies are doing nowadays, this isn’t a ramp test – you just try to maintain an average power output for a set duration. You’ll need a power meter on your bike to perform this test. You could very well do this outside but inside is a lot more ideal so you don’t have to deal with traffic and stop lights. However, doing this indoors requires a bike trainer – even more ideal is a smart bike trainer where you can control resistance. But the Vantage V2 is not able to control the resistance on your trainer. You’ll have to use another device to do so, which is not ideal. 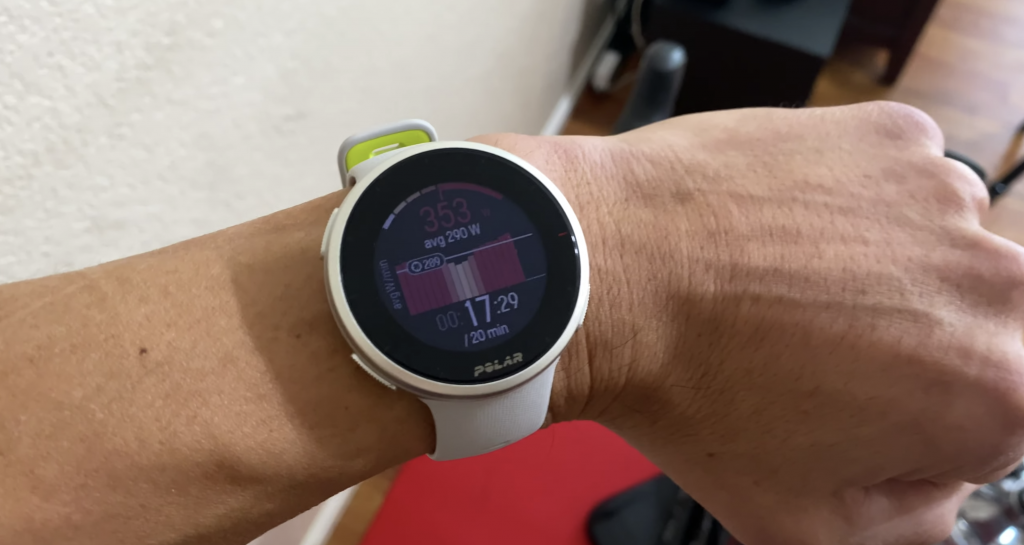 At the end of the test, it provides you with your FTP. 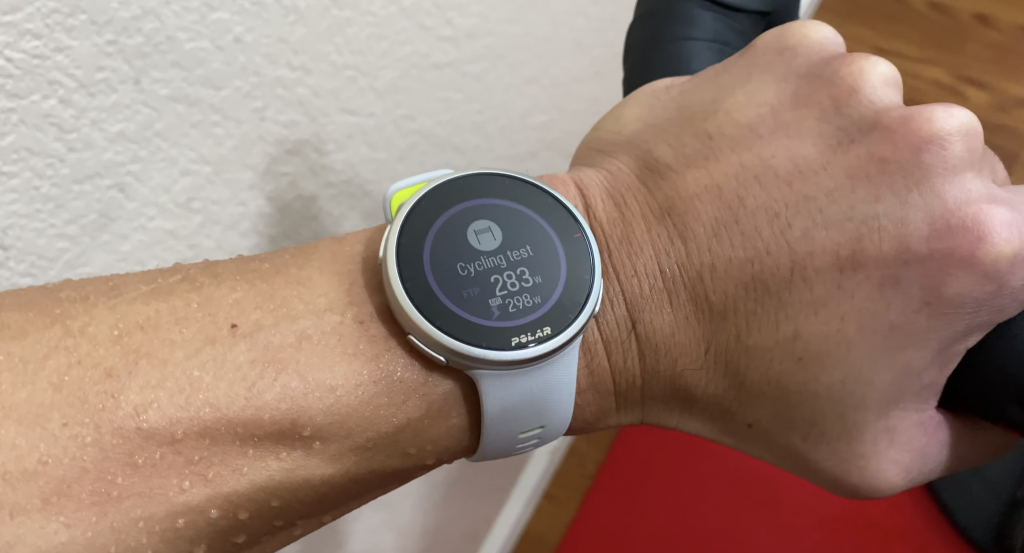 The Vantage V2 supports a host of external sensors, however, ONLY of the bluetooth variety. This is by far my biggest complaint about Polar wearables – the lack of ANT+ sensor support. This actually posed an issue with the cycling test where I had to use a Garmin Edge 1030 Plus to control the resistance on my trainer via ANT+ FE-C.

The lack of ANT+ sensor support is a rather large issue for indoor cycling. A lot of bike trainers can only transmit one bluetooth signal at a time. If you are connecting your bike trainer to an online cycling training platform like Zwift or TrainerRoad via an iPad or Apple TV, the bike trainer will be using it’s one (and only one) bluetooth connection to connect to the iPad or Apple TV, leaving none available to connect to the Vantage V2. What this means is that you won’t be able to collect power, cadence, or speed/distance on your watch.

The Vantage V2 is a modest update to the original Vantage V including the features that were introduced with the Grit X, new performance tests that are exclusive to the Vantage V2, all housed in a new aluminum case.

If you’re an existing Vantage V owner, the V2 probably doesn’t have enough new features to warrant an upgrade. But if you currently own a Vantage M, this could be a good upgrade path providing more training and performance features with a more premium looking watch.

For even more details on the Vantage V2, check out the video version of this in-depth review below: