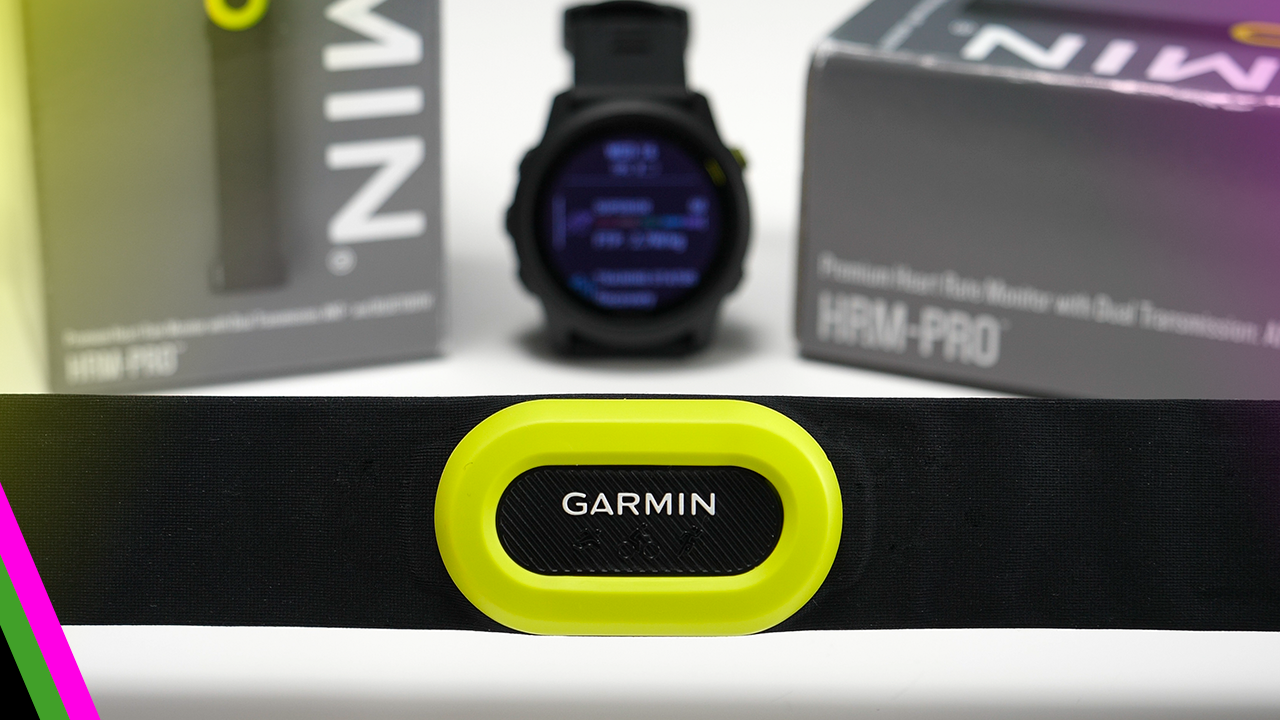 Garmin has just announced the new HRM-Pro chest heart rate strap which has both bluetooth along with ANT+ connectivity, but also has some neat tricks up it’s sleeve beyond just collecting accurate heart rate for running, cycling, swimming, and other sports.

Just like the HRM-Tri and HRM-Run, the HRM-Pro also collects advanced running dynamics including running power when it’s paired with a compatible Garmin device like the Forerunner 745 which was also released today. If you haven’t checked out my in-depth review on the Forerunner 745, it’s available right here.

Also, if you’re more into videos than articles, you can view the video version of this HRM-Pro in-depth review below:

The strap is made out of comfortable textile which is a similar material that’s used for the HRM-Tri. More details on that in the swimming portion of the review. 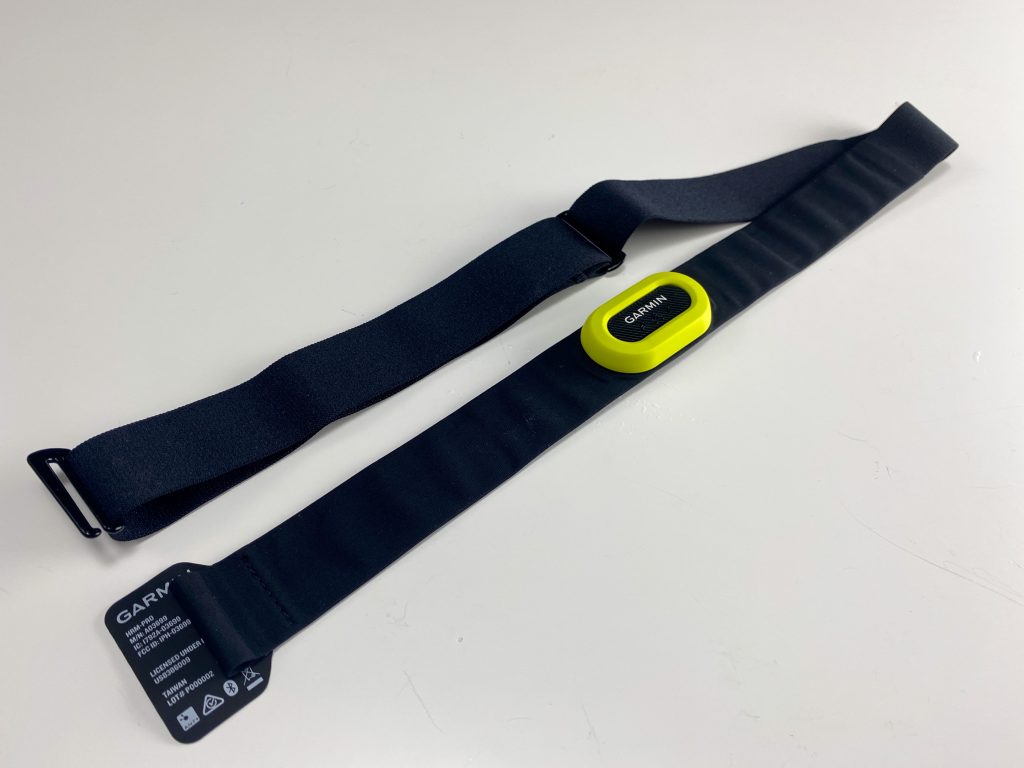 It uses a hook to secure it to your chest with a smooth piece of material underneath the closure to prevent any weird pinching or discomfort. 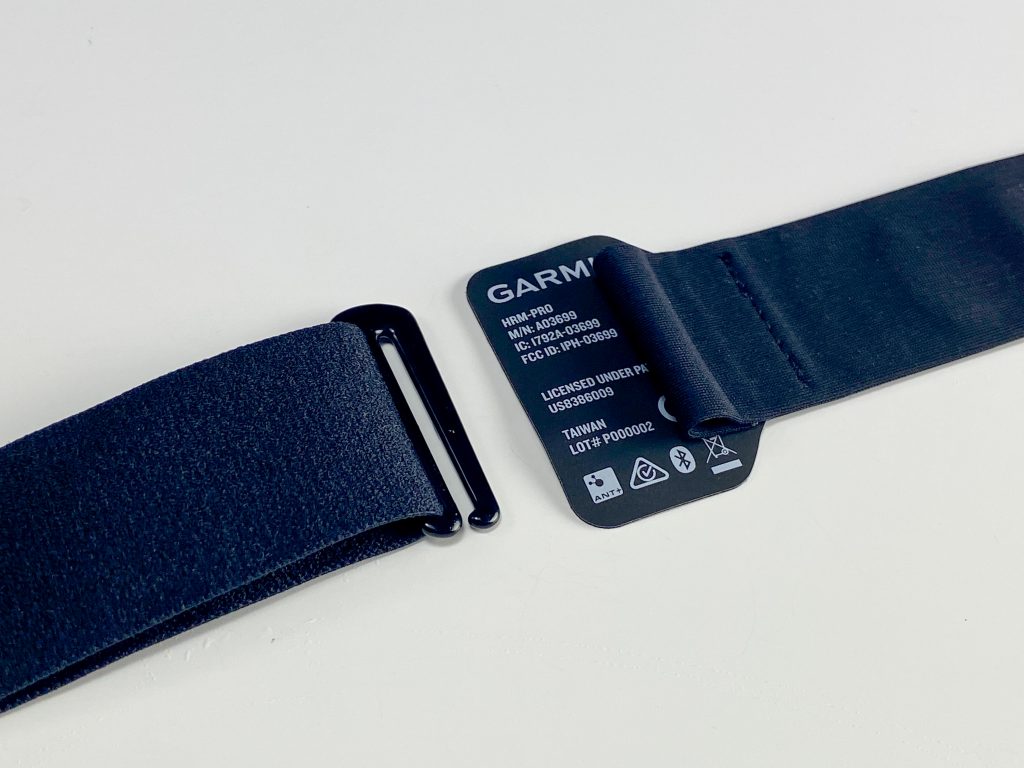 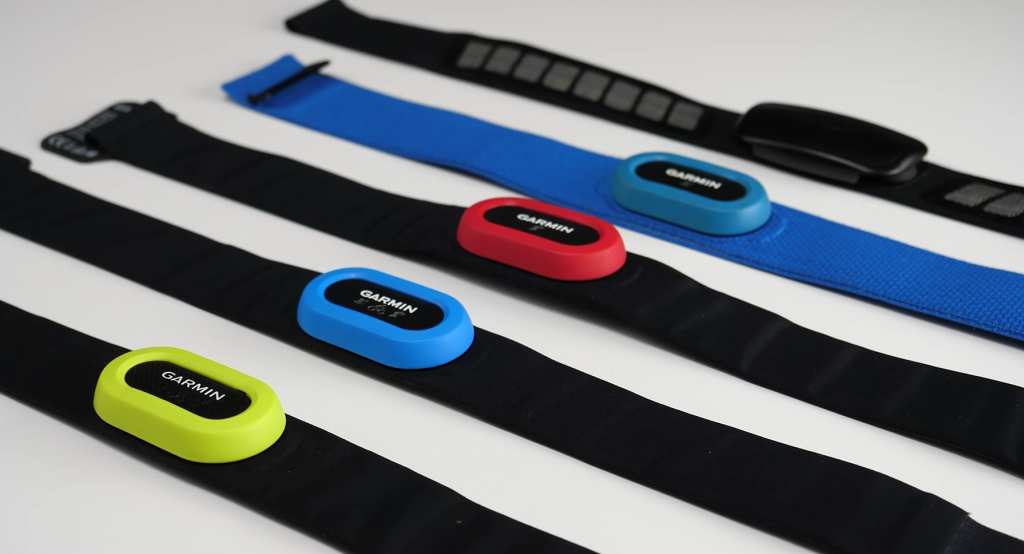 For battery life, the HRM Pro is rated to last up to a year using a CR2032 battery. You’ll remove the yellow rubber gasket and then use a small screwdriver to remove the battery cover. When you replace the battery, make sure that the rubber seal is just perfectly seated or it may get moisture inside. In the photo below, you can see that the top portion is slightly askew. 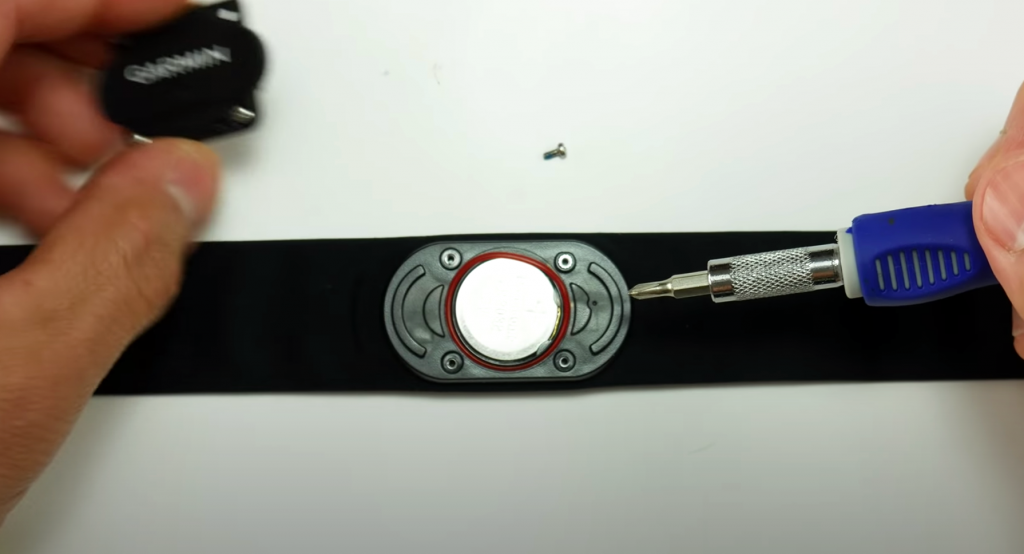 With the addition of bluetooth along with ANT+, you’ll be able to pair the HRM-Pro with indoor cycling training platforms like Zwift on an Apple TV or iPad. There are two concurrent bluetooth connections so you’ll be able to pair it with your iPad as well as another device that may only have bluetooth, like the Polar Grit X, but you’ll have an unlimited number of devices that you can connect with ANT+.

There’s a neat trick that the HRM Pro has up it’s sleeve and this is only possible with the addition of bluetooth – you can also pair it with Garmin Connect on your smartphone. And the reason why that’s neat is that the HRM-Pro can also collect your heart rate, steps, and intensity minutes and it can store that on the strap itself. And you may be asking why would I necessarily need to do that?

Let’s say you participate in activities where wearing a watch isn’t ideal, like martial arts or some team sports, but you still want to be able to collect your heart rate and steps from that activity so it will be added to your total daily activity. With the HRM-Pro, it stores all that data on the strap and then it syncs with Garmin Connect so the heart rate and steps during that activity are accounted for in your daily totals, as shown in the screenshot below where I used it for an indoor cycling training session but didn’t actually record the activity on the Forerunner 745. 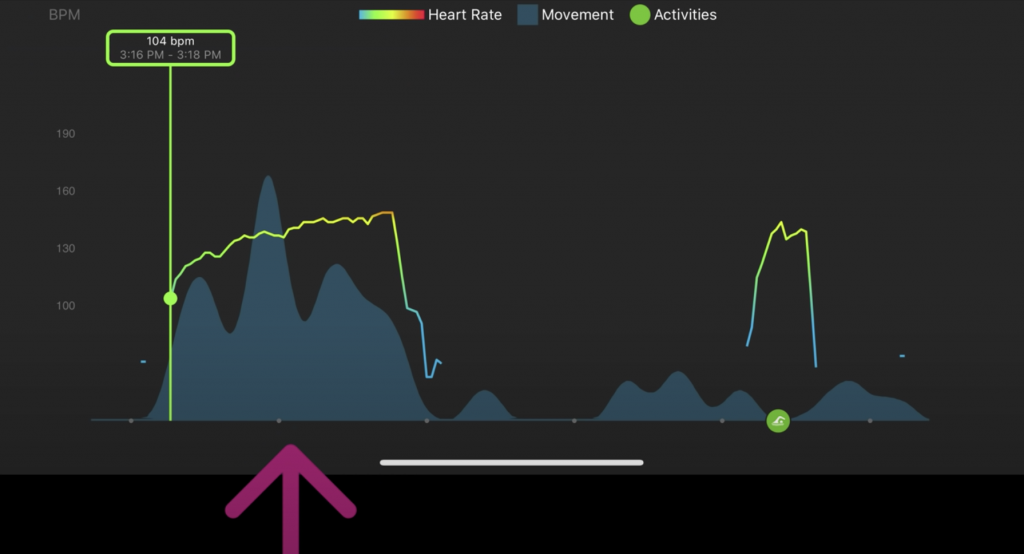 In fact, I wasn’t wearing any other Garmin device that syncs with this particular Garmin Connect account at that point in time, so that data is coming directly from the HRM-Pro. Notice though that it isn’t associated with an actual activity, rather it just shows in your daily breakdown as well as each chart for heart rate and steps.

But if you want to have it associated with an activity, you can start an activity on your watch and then just put it off to the side somewhere – and the watch does not need to be in range of the heart rate strap since the HRM-Pro is storing the information internally. Once you’ve saved the activity, you have the option of downloading stored heart rate data which is a very simple process where it searches for stored data, downloads it, and then processes it. 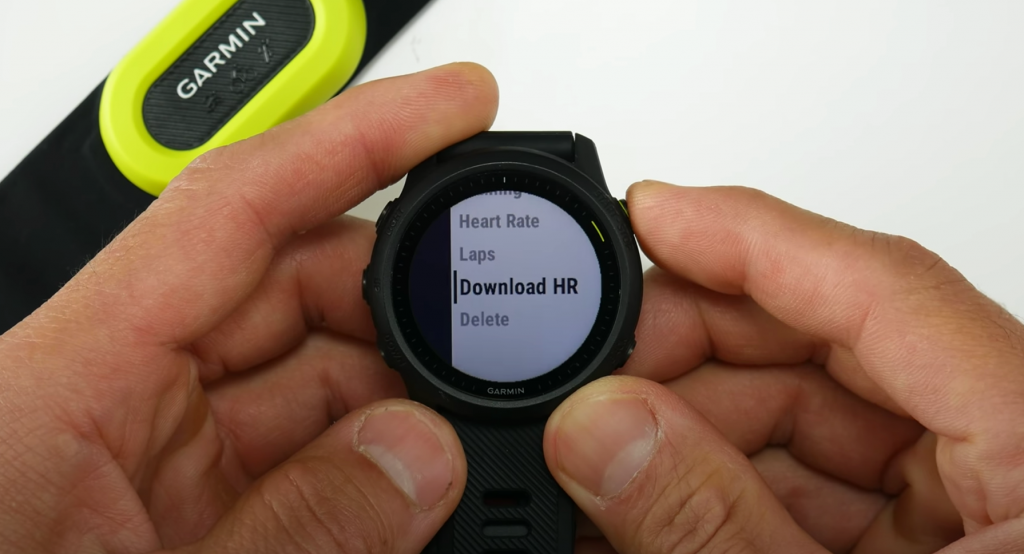 It’s the same process that’s used for swimming heart rate. Swimming capable heart rate straps like the HRM-Pro, HRM-Swim, as well as HRM-Tri store the heart rate data on the strap itself and the reason this is the case with swimming is that transmitting either ANT+ or Bluetooth through the water doesn’t really work well. That’s why it stores it internally and then downloads that data after the session. 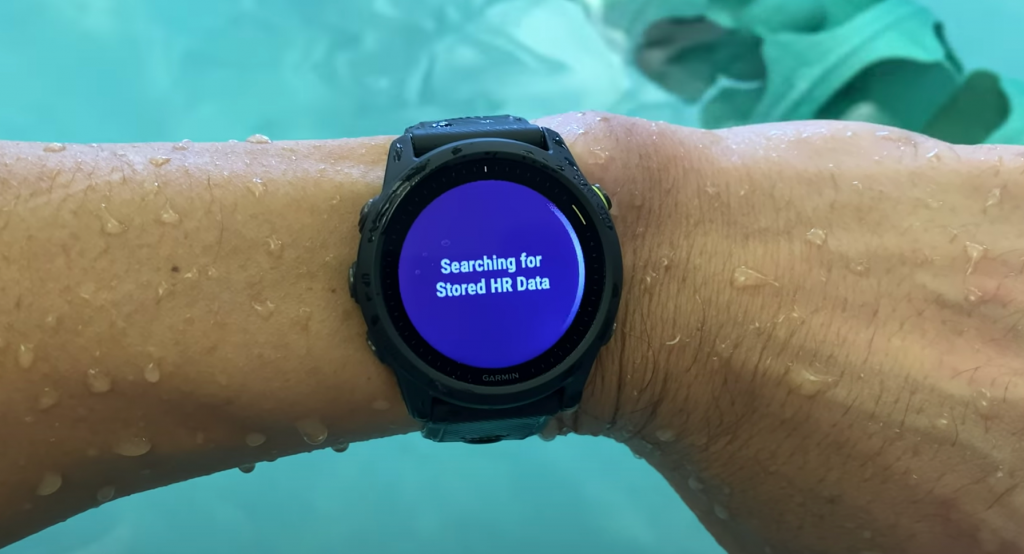 In terms of how much data the HRM-Pro can store internally, that’s 18 hours. Go beyond that and it just deletes the oldest data on the strap.

For the accuracy of the heart rate for swimming, I had no issues there. It was all very believable and I didn’t see any abnormalities. The chart below shows the HRM-Pro compared to wrist-based heart rate on the Forerunner 745, which you can see is not too shabby.

The HRM-Pro is designed for open water swimming and that’s both freshwater and saltwater and you can also use it for “occasional pool swimming”. The reason for the rather vague “occasional” wording is that the material that the HRM-Pro is constructed from doesn’t have the resistance to pool chemicals like the HRM-Swim does which is actually designed for consistent pool swimming since it’s made of more robust materials. 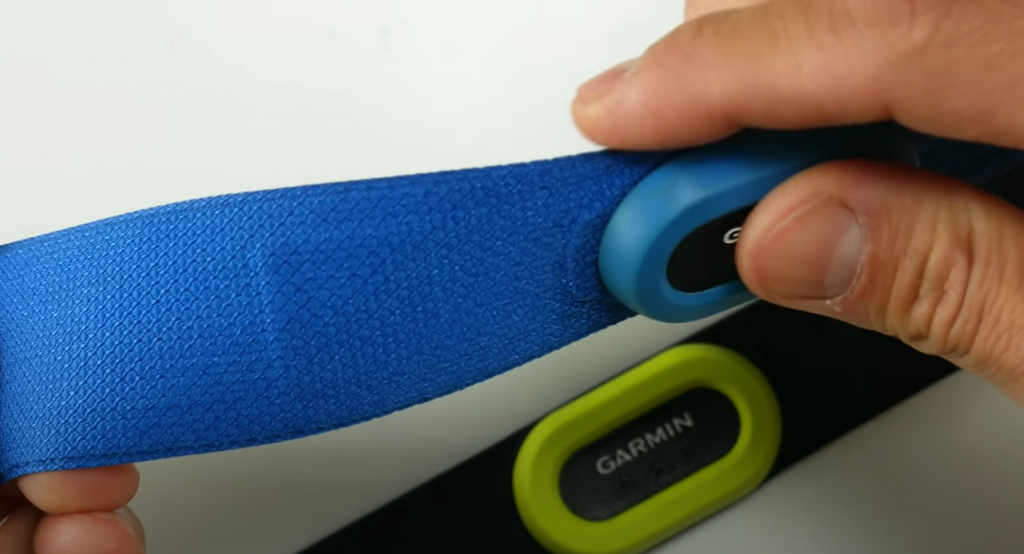 It’s going to be similar to the HRM-Tri, which I actually did break the rules with that one and used it for pool swimming a few times per month and it was perfectly fine.

However, the other reason that you may want to go with an HRM-Swim if you’re primarily doing pool swimming is that the HRM-Swim has a wider strap that has super grippy bits on it which helps it stay in place extremely well, especially in scenarios like pushing off the wall. The strap on the HRM Pro is a bit narrower which is super comfortable but it could potentially flip when pushing off wall. However, I didn’t actually experience this and it never flipped for me. 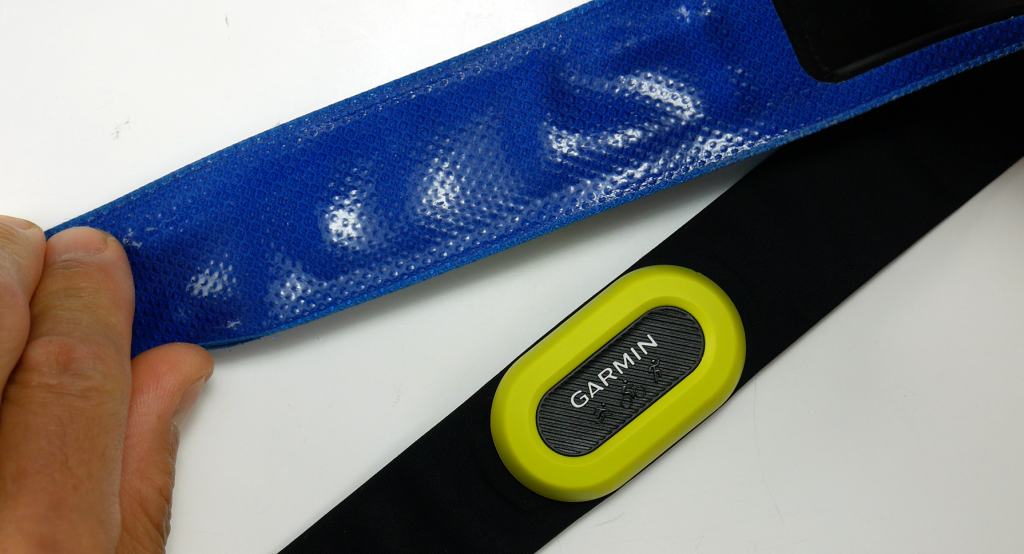 On this steady-state run on the treadmill, the HRM-Pro was quite solid compared to a Polar OH1 and Wahoo Tickr Fit arm heart rate straps which have optical sensors. It was actually faster to react at the beginning of the run and this was somewhat surprising since chest heart rate straps can sometimes take a couple minutes to “warm up” and get enough moisture on them to start registering accurately.

On this mountain bike ride, you can see that it lined up just fine with two other external heart rate sensors. Super tidy.

On this road ride, same deal. Good stuff and no dropouts or anything weird.

Running Dynamics
When it comes to running, the HRM-Pro not only collects heart rate but also collects Advanced Running Dynamics just like the HRM-Run and HRM Tri but do note that this is available over ANT+ and not bluetooth.

Garmin watches already can collect basic running dynamics like cadence and stride length on the wrist itself, but when you pair use the HRM-Pro you’ll get a lot more including your vertical ratio, vertical oscillation, ground contact time balance, ground contact time, as well as running power and let’s go through an example of each of these metrics. 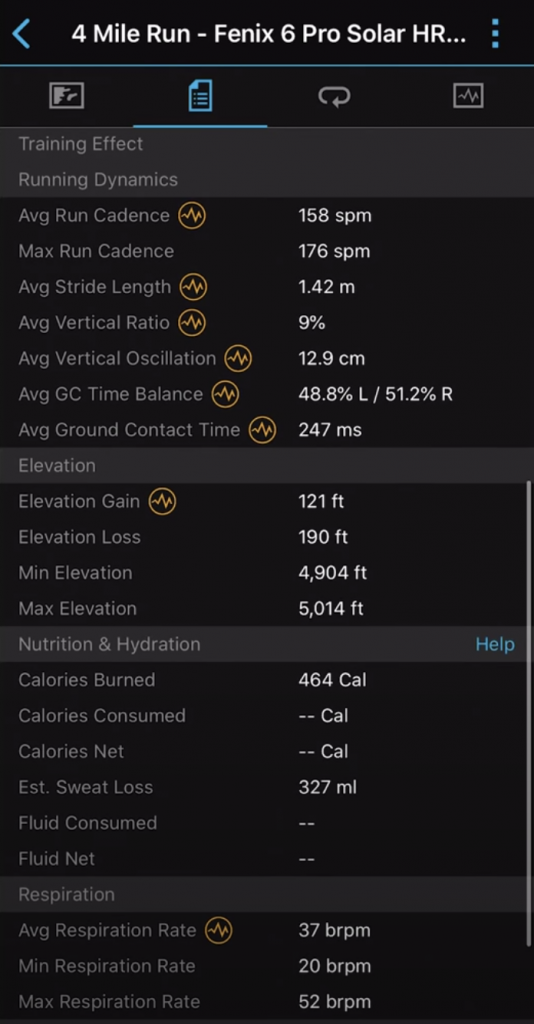 Vertical ratio is the ratio of vertical oscillation to stride length – the lower the vertical ratio the better. For example, in the chart below, you can see at the beginning of the run the ratio was quite high as I warmed up and my strides weren’t quite as long. Throughout the run my ratio stayed consistent as I was mainly on flat ground. The peak at the end shows a steep hill which will definitely have a higher vertical oscillation to stride length ratio, so this could be a beneficial number to look at to get a better gauge of your running efficiency.

Ground Contact Time Balance is the percentage of time you spend with your foot on the ground and again, you can see if this changes during the course of your run and see if there is an asymmetry.

And then with Ground Contact Time, that’s the amount of time that your foot touches the ground with each stride.

In addition to those running dynamics, the HRM-Pro also collects running power which you can think of as how much work you are putting into your run. Running power is becoming more popular lately especially in a trail running context where pace isn’t a great gauge on effort since there can be drastic changes in elevation.

With running power, every company measures it a little differently and that not only includes the actual number but also where it’s collected. Some companies collect it via a footpod, some from the wrist itself, and in this case with the HRM-Pro, from a chest strap. With running power, I’m not really looking at the actual running power number, like 200 watts vs 300 watts because that’s not necessarily standardized throughout the industry. What I am looking at are the trends. So if my power goes down, I want to see both devices go down. If my power goes up, I want to see both devices go up.

The chart below shows the HRM-Pro in light blue, the dark blue line below it is the Stryd footpod, and the orange line is from the wrist with the COROS Pace 2. And yes, the Pace 2 and the Stryd footpod do indeed line up insanely close to each other. Anyhow, like I said, I’m not really interested in the actual power numbers. What I am interested in is that when you see an increase in power on one device, the other device reports the same thing. And that is indeed happening here. The trends are pretty much right in line with each other throughout the course of the run, other than a low point at the end of the run where the HRM Pro dipped a bit.

Wrap-Up
The HRM-Pro is a solid update that updates the HRM-Tri with bluetooth that was originally introduced on the HRM-Dual but the HRM-Pro is also more capable than the HRM-Run. If you have a functioning HRM-Run or HRM-Tri and don’t need bluetooth, then you’re probably all set. But if you have a bluetooth-only device or if you’d like to take your training indoors with either online cycling or running on Zwift, then you may want to give the HRM-Pro a try.

Garmin has a lot of heart rate straps to choose from and you can either save the money with all the other options but if you can spring for it, I think it’s well worth the money being Garmin’s most capable heart rate strap to date.