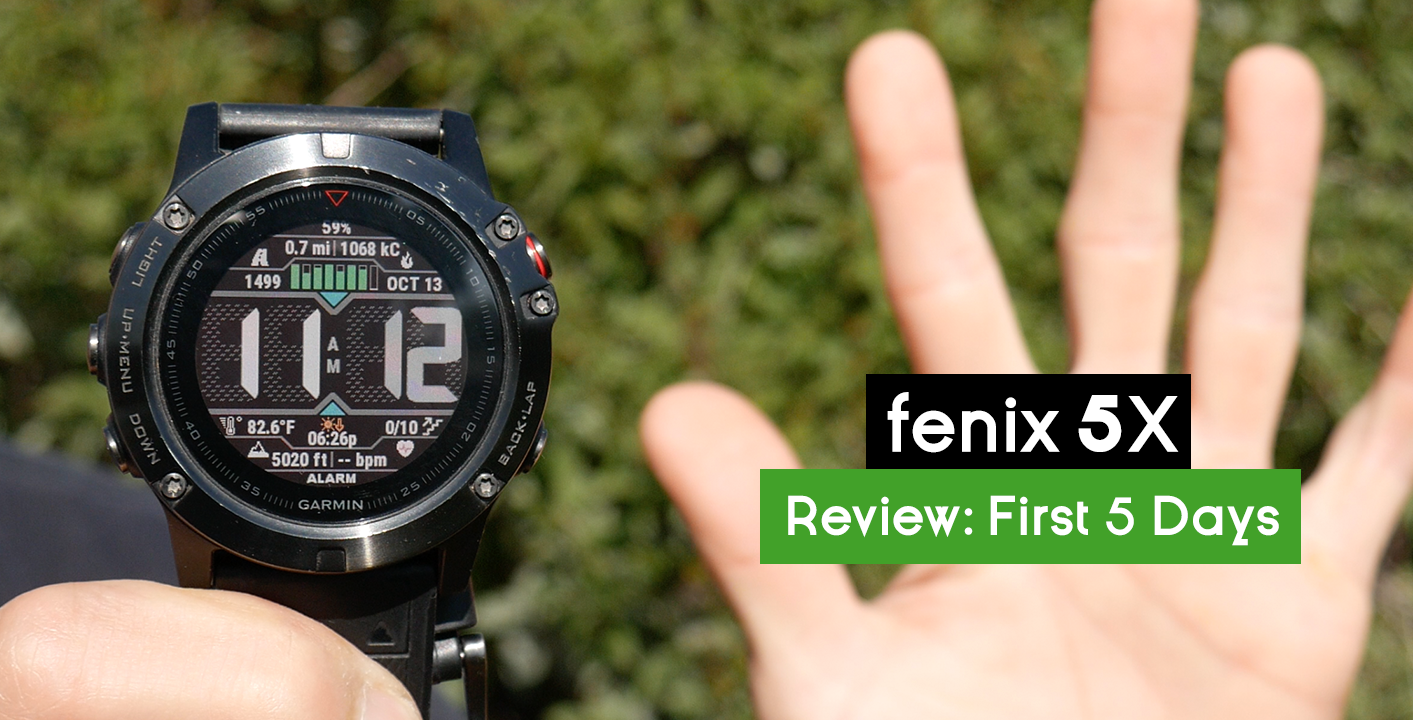 This was supposed to be an upgrade, right?

So I got my Fenix 5X just a week ago, which is light years later than the rest of the world because I forgot to preorder it, I was on vacation, and once I was ready it wasn’t in stock anywhere. Plus I still have my 3HR which I’ve been very pleased with overall. Anyways, All first-world Fenix 5 problems.

I was actually hoping that some of the launch bugs would be worked out in firmware updates when I got mine since it was later than the rest of the world, but…maybe I should have waited longer.

So first off, some quick initial impressions out of the box:
really nice hardware,
looks and feels great as expected,
Liked the redesigned clasp,
rounder buttons
and the additional loop for the extra watch

Display was awesome with the increased resolution and colors, and the software was super responsive due to upgraded internals
(The 3HR definitively chugs when you have a lot of data intensive widgets when scrolling through them.)

I was really surprised at how much heavier just 12 grams felt compared to my 3HR.

All good stuff overall. I’ll go into more detail in a different, more detailed video. If you want a notification when that drops, just click the subscribe button below.

But now on to the real meat. To note: I tested the 5X against my 3HR as well as my Edge 520 with a Garmin HR strap for cycling and a 910xt with the same strap for running. I rode over 250 miles mtn biking, road biking as well as the spin bike and also ran 12+ miles both outdoor and indoors.

So here the thing: There are 2 things the Fenix 5, or any activity tracker, HAS to do right: GPS and HR.

Good news: I seem to be getting accurate GPS so far, but there are dozens upon dozens of forum posts with people complaining a it GPS problems. So I lucked out there.

The bad news: the HR is beyond screwball on mine for cycling. Consistently getting very low heart rates on outdoor bike rides, both road and mtn, but somehow actually getting accurate results on the spin bike? I’m sure they changed the algorithms with this new watch but WTF are some of these results about? So the results are pretty much reversed from the 3HR. Better results indoors but worse results outdoors.

But for Running: outdoor was great. Consistent results and on par with my 3HR. Indoor was a completely different bag of nuts. Pace was hilariously off compared to the 3HR although heart rate was actually accurate.

You may want to skip this part if you’re not interested, but I’m going to go, in detail, through my first 5 days using the 5X compared with my 3HR showing some pretty drastic differences between the 2 devices and the data recorded.

So far, I wouldn’t call myself a satisfied customer. So many things are awesome about the 5 but with one of the two main functions not working correctly, it kind of overshadows any of the many improvements they made from the 3. Hopefully firmware can improve the heart rate accuracy, which it did with the 3HR. I’ll test out the beta update to see if that will change things a bit and I’ll have a follow up video with the results.